A short-term strategy for a long-term issue, where is the support for apprentices?

The Federal Budget’s plan to subsidise the wages of apprentices and trainees over the next 12 months will no doubt provide ample hi-vis photo opportunities for Government Ministers. But it’s a short-term strategy to a problem that requires long-term action, and it doesn’t solve the issues that apprentices have faced from dodgy employers long before the pandemic. 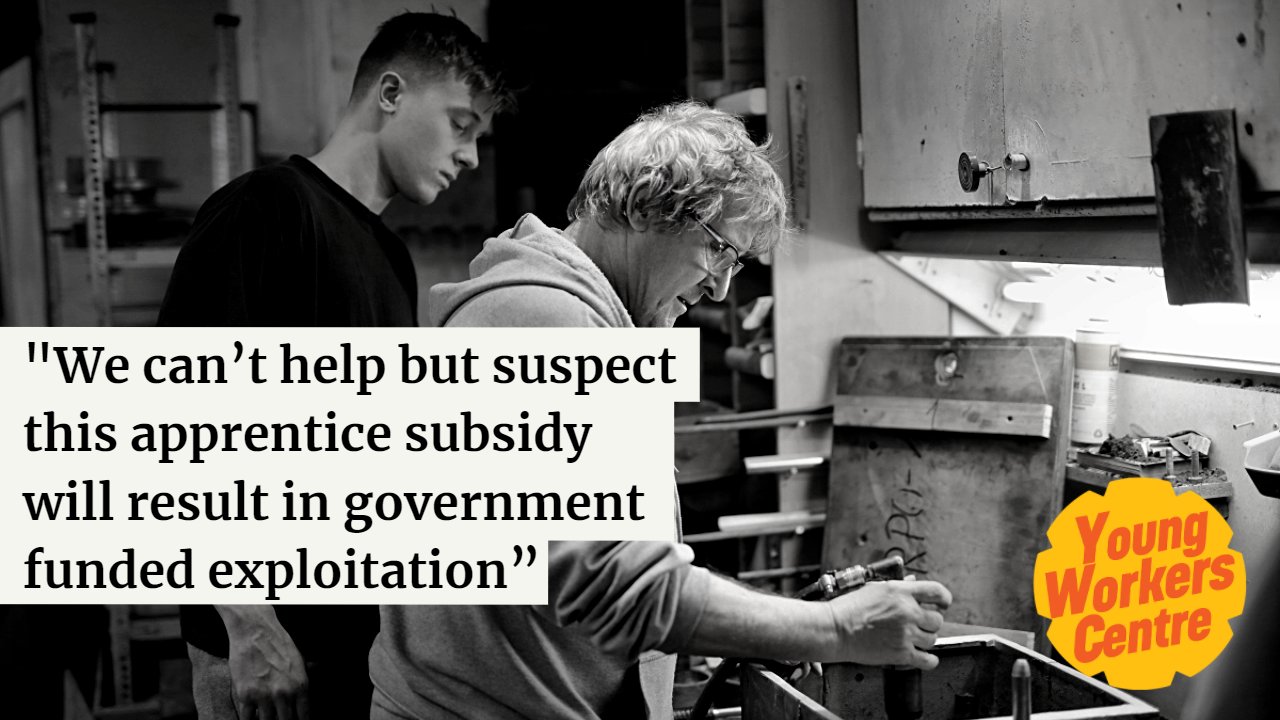 Nearly 70% of the 270,000 currently enrolled apprentices and trainees in Australia are under the age of 25, and they are a vital part of our skilled economy. But, wedged between school leavers and job-seekers, they have been largely left out of the narrative about our COVID recovery. We must seize the opportunity to build our VET system back better in all industries once the pandemic is over.

Prior to COVID, our Vocational Education and Training (VET) sector was underfunded and poorly regulated. Australia’s current total investment in VET is at its lowest level since 2008, having endured billions of dollars of cuts. It has been estimated by the Mitchell Institute that there will be 130,000 fewer apprenticeships and traineeships than previously expected by June 2023. The Government has failed to support this critical group of workers through what is likely to be the greatest economic challenge of their lifetimes. Don’t be fooled - the Federal Government’s JobTrainer package announcement back in July was nothing more than repackaged funding, not new funding which is desperately needed for a gutted system.

In addition to waning funding, since March of this year, the number of apprentices that have contacted the Young Workers Centre (YWC) to lodge a complaint or seek advice has doubled, and now accounts for nearly 50% of our legal centre enquiries.

We heard from a 17 year old hairdressing apprentice in regional Victoria who was made redundant via Facebook Messenger at the start of the pandemic. She also had her wages stolen by her boss throughout her apprenticeship.

"I couldn't believe I lost my apprenticeship so quickly," she said. "I had already been underpaid, and was scared that losing my job meant losing my ability to pursue my career in my town."

Melbourne-based gardening apprentice Andi was dismissed after raising mental health issues as a result of the pandemic.

"I'm passionate about the work that I do," Andi said. "I worked hard there and did a lot of overtime, even as I struggled financially on the low apprentice wages. And yet, when I spoke up about mental health issues I was treated differently, which led to me being fired."

These are two examples of apprentices experiencing unfair treatment during the pandemic, but these issues are not new. These young apprentices were victims of wage theft, unsafe work practices and unfair suspensions prior to COVID.

That’s why subsidising wages for apprentices and trainees for a year, while ignoring the fact that apprentices are experiencing abuse at work, is not enough to ensure that apprenticeships and traineeships are safe and viable career options in the long term. The last thing we need to see is dodgy employers taking advantage of the cheap labour provided by the subsidy, with no regard for supervision, training or safety. A licencing system should also be part of a Government-led redesign of our apprenticeship and traineeship system. This keeps employers accountable and allows for suspension or disqualification of licences when apprentices are underpaid or mistreated.

While many look at the fall of our once world-leading apprenticeship system with dismay, the YWC see opportunity. It’s vital, as details of the Federal Budget emerge, to have an apprenticeship-specific plan for the long term, not just one. One that can effectively boost apprentice and trainee commencements in all industries, but still ensure the safety of these young workers while doing so. Like so many other areas of investment in young people, this will not be for them alone. Our whole economy stands to benefit.