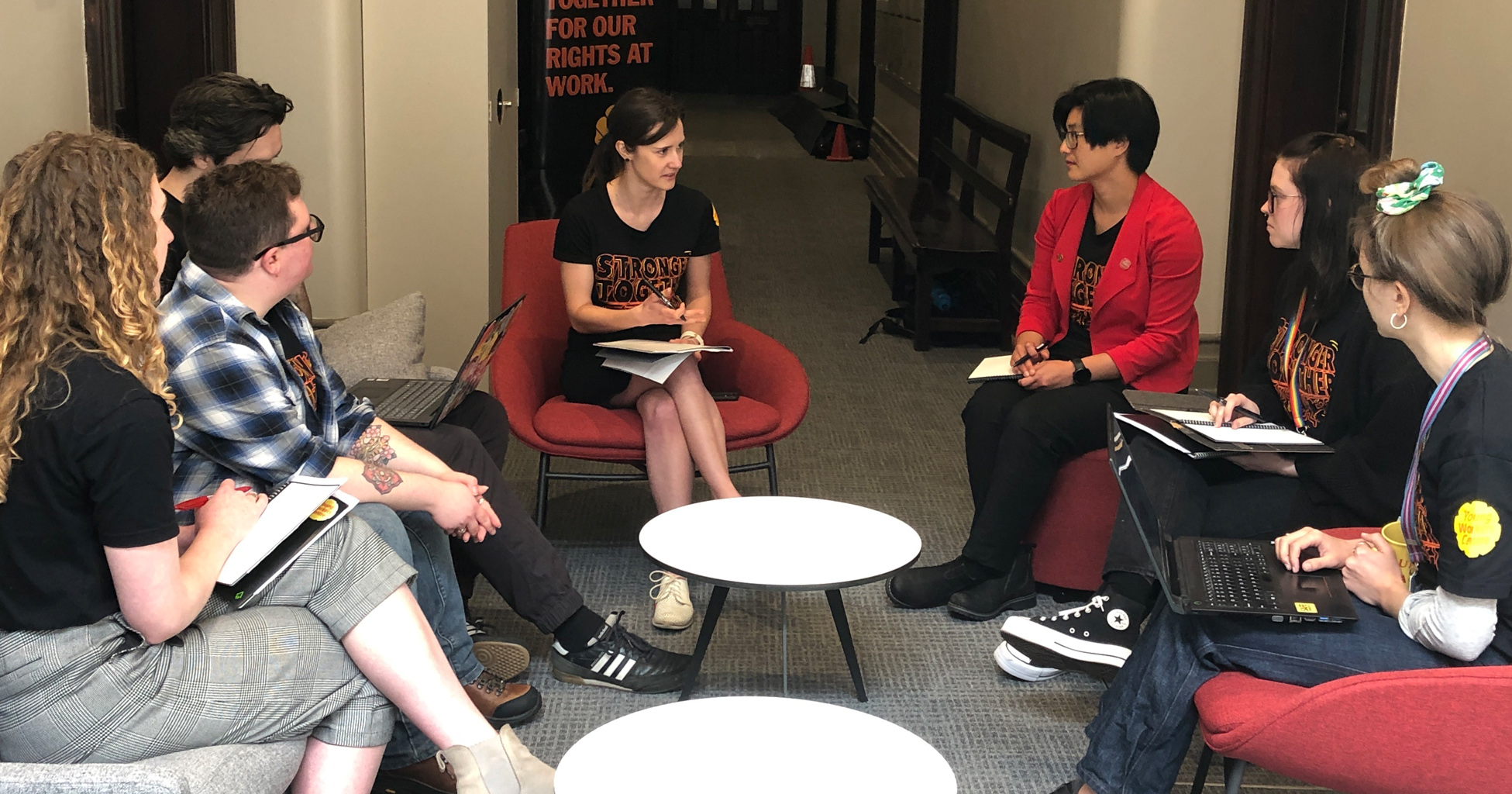 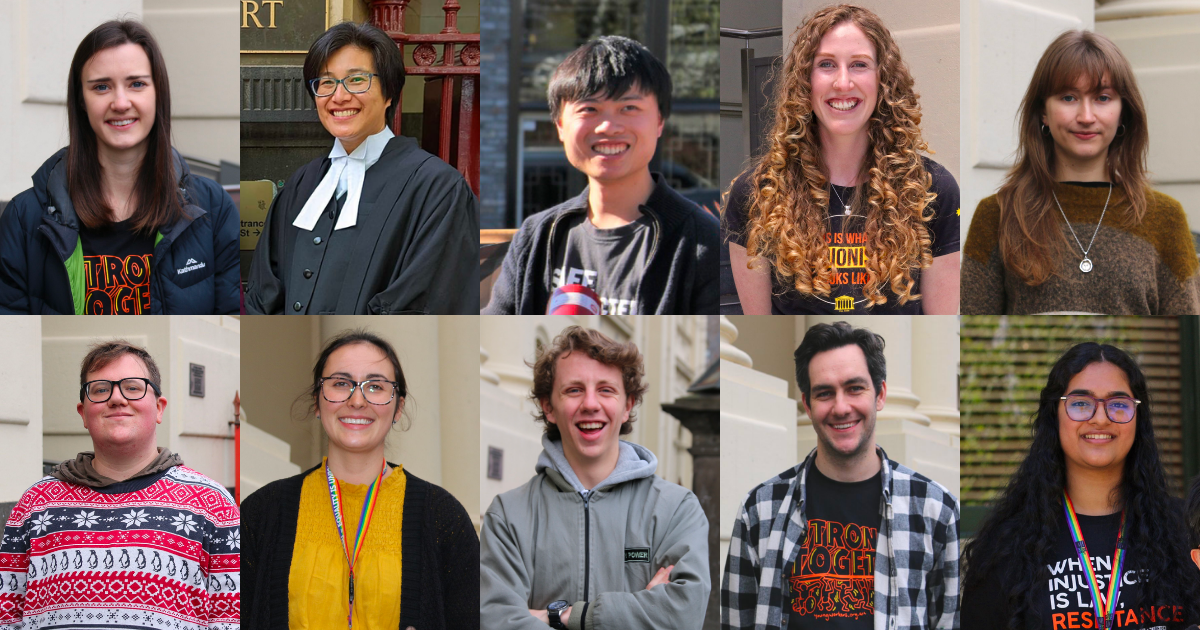 Felicity (she/her) started work in the Australian trade union movement after studying Politics in the UK and working and volunteering for MPs and campaign organisations.

Before joining the Young Workers Centre, Felicity led the Campaigns Team at Victorian Trades Hall through more elections than she can count.

In her spare time you can find her walking her dog on the beach, going for long runs (yes, she’s run a marathon) and watching Geelong win.

Oanh (she/her) grew up in a home sweatshop, where she and her siblings helped their parents sew thousands upon thousands of t-shirts.  As a result, she devoted her life to working in and with unions, advocating for workers’ rights and fighting to end worker exploitation.  Strangely enough, sewing is one of her hobbies.  She also likes to read, ride her bike and marvel at birds.

Prior to coming to YWC, Oanh was a Legal and Industrial Officer at TCFUA (which amalgamated with CFMEU) and an employment and discrimination law lawyer in firms in the UK and Qld that had unions as their clients.  She started her legal career as an Associate to the Honourable Justice Roslyn Atkinson of the Qld Supreme Court. Oanh cares deeply about social justice, having volunteered at many community legal centres throughout her studies and during her career.

Oanh’s name is pronounced “wun”, and sounds much like the number one.

Leon (he/him) knew nothing about unions or workers’ rights before doing a legal placement at Young Workers Centre in 2016. He enjoyed it so much that he abandoned his property law dreams and joined YWC as a placement coordinator and eventually a solicitor. He is passionate about making Victoria a better place for the next generation of young workers. Leon is proudly trans and cares deeply about ensuring YWC is a welcoming place for all young workers and volunteers.

Leon spends his free time writing, drinking coffee, and making spreadsheets for everything.

Tiarne (she/her) grew up in south-metro Perth, WA and made the move to Melbourne in 2016 after having completed her law degree. Having always been politically and socially-justice minded, she found the corporate-centric and competitive nature of her studies challenging and so moved into community organising and public policy work once she graduated.

She started working at the Victorian Trades Hall council in late 2016 in the politics and research team while she finished her Masters in Public Policy and found her home in the collectivism, solidarity and progressivism of the Victorian union movement. After seeing how stacked the workplace laws are against young and vulnerable workers, Tiarne returned to the law and commenced legal practice in 2020.

Tiarne is passionate about workers’ rights, smashing the patriarchy, climate justice, racial equality, her rescue moggy and greyhound, dad jokes, and trying out every brunch spot in Brunswick.

Tiarne is pronounced “tee-ahn” and she also answers to T

Rae (she/her) was introduced to unions and workplace rights at a time where she and her co-workers were being substantially underpaid. Her experience with wage theft sparked a passion to ensure that other young workers weren’t being taken advantage of in the same way.

Rae was an advocate at the Young Workers Centre in the summer of 2020 and again in Semester 2, 2020. She is currently completing her law degree and spends her free time picking up an array of hobbies including knitting, rollerblading, finishing jigsaw puzzles and trying to find the best coffee spot in Melbourne.

Lauren (she/her) came to be involved in the union movement during her years as a hospitality worker where she commonly encountered and saw her friends encounter dodgy workplace practices! She was an advocate at the Young Workers Centre in Semester 2, 2019. She has recently finished her law degree.

She also enjoys spending time with her menagerie of animals, being outdoors and over-investing in TV shows.

James (he/him) began his union journey after reaching out to the Young Workers Centre for help while working in hospitality and is passionate about the role young people have in ending wage theft.

Since then he has participated in Union Summer 2018, volunteered with Hospo Voice and campaigned during the state and federal elections. James loves a good dinner party, plays Dungeons & Dragons every week and starts hobby projects faster than he can finish them.

Josie (she/her) has studied climate change through the social science discipline and is obsessed with the idea that we can fix so many of our societal problems by winning back worker power from the billionaires. She came to be involved in the union movement when she attended the YWC conference on climate justice and has been a passionate unionist ever since.

She only wishes she had found unionism back when she was being exploited by dodgy bosses so she could have helped her and her co-workers wrangle back thousands of dollars of stolen wages! Oops!

Outside of YWC she organises for a climate jobs guarantee with Tomorrow Movement, spends time appreciating nature, and writes.

Phoebe (she/her) became involved in the union movement through working in the hospitality industry for two years. She experienced wage-theft and bad bosses first-hand and heard about it constantly from her friends. Along with her background in political science, this inspired her to make a difference through the union movement.

Prior to the Young Workers Centre, Phoebe campaigned on workers’ rights at the 2022 federal and state elections in marginal electorates. Phoebe also loves hanging out with her chihuahua (Charlie) and asking everyone
what their star sign is.

Neo (he/they) is a secondary student-teacher. Having worked in a variety of industries he has dealt first hand with the exploitation and mistreatment young workers face everyday, but has always found the unions to be the greatest support.

Neo lives by the mantra “Solidarity Forever”, finding that it’s always best to stand by fellow workers against oppression. He’s passionate about growing the union movement, and being a student-teacher, knows that knowledge is strength.

Outside of the YWC Neo loves the Essendon F.C, plays cricket, studies Irish language and writes.

With their own experiences and perspectives each member of our team makes the Young Workers Centre as successful as it is in helping young workers.

Whether it be support through a workplace issue or educating young people about their rights as they move into working life.