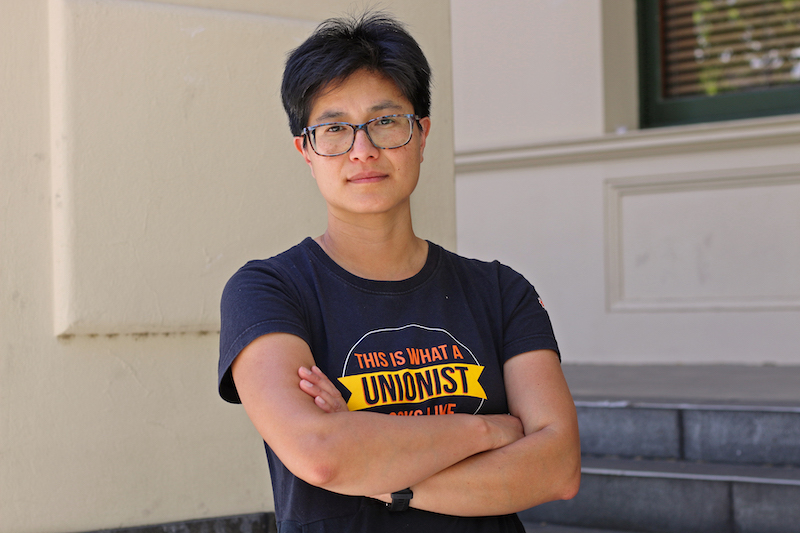 Since the Young Workers Centre (Centre) was launched in 2016, we have spoken to over 35,000 students and apprentices. The Centre has assisted more than 2,600 young workers with workplace issues and recovered almost $2 million in reimbursed unpaid wages and other entitlements, and compensation for unfair termination of employment, sexual harassment and discrimination. The Centre represents young people from many backgrounds, including temporary migrants in Australia. We have expertise in representing and campaigning with apprentices to improve their working conditions and ensure they complete their apprenticeships.

This article was originally published by AUSPUBLAW

When we think about age discrimination, we think and talk about how it affects older people, but it equally affects young people. The law itself is discriminatory for young people. Alysia Blackham’s new book both explains the problems, and proffers solutions.

Blackham's book considers the framework of ‘naming, blaming and claiming’ to explain how disputes emerge. In this post, I discuss some relevant examples where young workers name and blame, and discuss why they do not claim. I also comment on a few of Blackham’s suggested reforms.

Examples of age discrimination against young workers within the legal system

The mere existence of junior rates of pay facilitates acceptance of age discrimination in work.

Again, this is a law that entrenches and facilitates age discrimination and ageism.

Naming and blaming: Examples of age discrimination against young workers

In addition to age discrimination entrenched in our laws, young workers come to the Centre with problems in their workplace. They do not necessarily use the terminology of age discrimination, but they describe it exactly. To use the language in Blackham’s book about Naming, Claiming and Blaming, they are naming the problem.

Some examples of what young workers have told us include:

One young worker got scolded for being insufficiently prepared when she got her period at work. She was required to suffer the embarrassment of an obviously stained uniform instead of being permitted to go buy supplies. This worker worked in a health industry clinic inside a shopping centre, near a supermarket. It would have taken no more than 10 minutes for her to leave and to return.

Blackham’s book discusses the intersectionalities of age discrimination and how it connects to, is magnified by or magnifies other forms of discrimination. Unfortunately at the Centre, we are seeing more and more sexual harassment matters, which are strongly connected to age discrimination or ageism.

Young workers also come to us with matters that may not be so squarely ageism, but which are related to ageism. These include, for example:

Despite all this, the Centre has never had a client who wished to pursue their age discrimination matter. Young workers name, and they blame, but claiming is problematic.

The Centre takes a holistic approach to solving the problems that young workers experience at work. We do that by providing young people with knowledge about their workplace rights, including rights under equality law, and the tools to fix problems in the workplace, including organising and getting together with other workers.

We provide a community legal centre to assist because we acknowledge the agency and power in asserting individual rights but believe in the greater power of the collective to resolve issues in a holistic and proactive manner – that is, to prevent age discrimination from happening.

COVID and JobKeeper were some prime examples, for the Centre, of the operation of age discrimination. The Australian federal government introduced the JobKeeper payment (among other support measures) in March 2020 after concerted effort from the union movement. The JobKeeper payment was a wage subsidy for businesses to pay employees wages in order for them to maintain an income and retain their jobs during the economic downturn caused by necessary public health responses to the COVID-19 Pandemic.

The JobKeeper payment was another example of where the legal mechanism of an individual asserting rights could not have fixed the problems faced by workers. Many young workers lost work but were nevertheless locked out of JobKeeper for ostensibly objective purposes – due to being casual employees – or their employer chose not to apply for JobKeeper on their behalf for reasons that appear to be age-based stereotypes. One employer, whose employees were mostly under the age of 18, told their workers that they did not need JobKeeper as they would not need to pay rent and could return to live at their parent’s home. In several workplaces, workers got together, and with facilitation and assistance by us, the workers succeeded in persuading their employer to apply for JobKeeper payments on their behalf.

Another reason why individual rights assertion is not the best mechanism to eliminate age discrimination in the workplace is because our adversarial legal system, unfortunately, tends to re-victimise people.

Blackham proffers a list of 51 reforms, summarised in Appendix 1 and discussed thoroughly throughout the book.  In particular, there are three themes which we at the Centre strongly support and which would have ongoing implications for cultural and behavioural change.

First, data collection. We love data collection! Someone once said – you don’t count if you’re not counted. Extensive analysis of data underlies Blackham’s book, but the piecemeal, inconsistent and incomplete collection of data across the equality agencies means that maybe only an academic could draw useful conclusions from the data available. Blackham proposes that equality agencies review and re-prioritise the gathering and communication of data to advance its public messaging and support elimination of discrimination. The Centre collects a lot of data, and we use it to structure our campaigns. For example, our current campaign around apprentices is predominantly due to seeing both an exponential increase in enquiries from apprentices, and themes emerging from our data about how complicated their matters and issues are. We use data to demonstrate the extent of a problem, and data forms the basis for a persuasive argument for reform.

Second, the limit on use of the use of non-disclosure agreements (NDAs) and confidentiality in settlement discussions. Blackham proposes that government more closely regulate the use of NDAs in discrimination cases, including through legislative change. NDAs treat matters in equality law as personal and private, rather than being systemic, societal problems. NDAs entrench power imbalances and mask the extent of a problem.

NDAs and confidentiality in settlement discussions are so paradigmatic that suggesting otherwise can de-rail settlement negotiations. It has been suggested to me during mediation and conferences that requesting that settlements not be confidential is an example of bad faith negotiation; this has been suggested to me by mediators, conciliators, judicial offers and, less surprisingly, my opposition. Confidentiality is so entrenched in how we practice law and do alternative dispute resolution that pushing back against NDAs and confidentiality – at an individual level – is nigh on impossible.

Last, and perhaps most importantly, a positive duty in equality law is necessary. Positive duties are analysed in Blackham’s work in Chapter 7, and are described as a ‘step change in equality law creating a legal framework that requires organizations to develop their own solutions to equality issues’. A positive duty would shift the burden off individuals, and would allow for proactive and preventative steps to be taken. It would allow subtle, minor or supposedly less harmful forms of age discrimination to be addressed. However, a positive duty must have an enforcement mechanism.

Victoria’s Equal Opportunity Act 2020 does have a positive duty, but there is no cause of action that attaches to it. There is no ability for a person, a union, or an organisation to enforce any action to be taken under the positive duty or to seek redress for a breach of the duty. The only body that has the ability to do anything is the Victorian Equal Opportunity and Human Rights Commission, and that power is only to investigate. To my knowledge, it has only exercised this power once in the twelve years that it has had the power. To get a sense of how resource intensive that was, it began its discussions prior to 2019, commenced in 2020 and only released its report in 2022 – a two-year investigation.

The Centre hears many stories from young workers, who can name the problem of age discrimination, and they know squarely where the blame lies. Claiming, however, is problematic because our current system is sub-standard. Blackham’s new book is a powerful call to action with its list of reforms. We need to do so much more to ensure age discrimination does not prevent everyone from flourishing in the workplace, and in society. 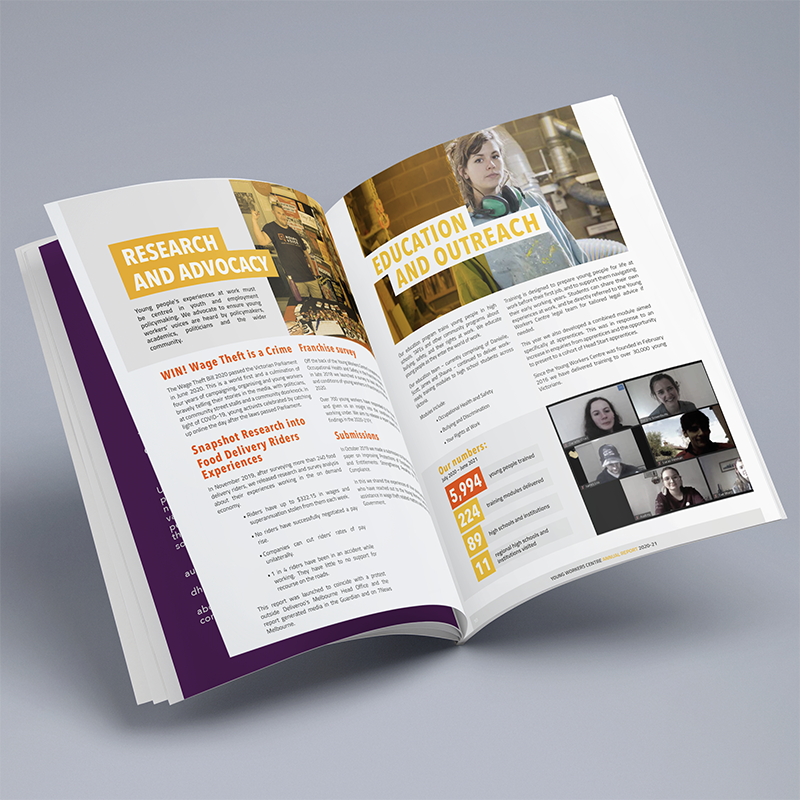